Top Posts
Beyond MoCo: 13-Year-Old Brings Loaded Gun to Prince...
Beyond MoCo: A Joint Statement from Governor Wes...
MCFRS Respond to Fire at Sardi’s in Gaithersburg
Update: 16-Year-Old Shot in Germantown
MCPD on the Scene of Shooting in Germantown...
Nava Thai Has Closed
Detectives From Special Investigations Unit are Asking For...
Beyond MoCo: Maryland State Police Seeks Assistance In...
Suspect Arrested in Connection With Germantown Shooting
Montgomery Parks Honored With International Digital and Video...
Beyond MoCoBoydsGaithersburgGermantownMCPSMoCoMoCo NewsMoCo SpotlightNews 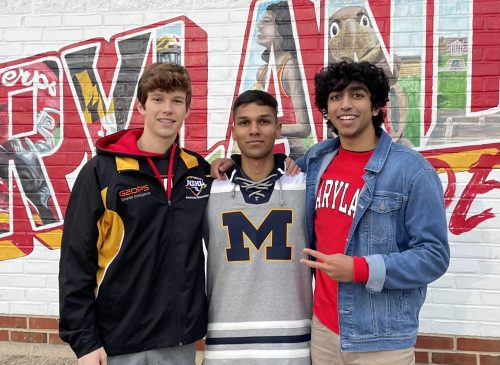 These students were amongst the many seniors to miss out on the end of the year senior fun and started freshman year behind a screen. Quarantine left everyone with a little extra time on their hands. Jason Steinberg and Sid Jagtap founded MoCo Tutors, an affordable digital tutoring service aimed at helping Montgomery County students struggling with virtual instruction. Meanwhile, Yuvan Sundrani gained some experience and insight while interning with the artificial intelligence laboratory at the National Institute of Standards and Technology (NIST) in Gaithersburg as a Data Engineer Intern.

The winter break before the first back in-person semester started in the spring, Jagtap, a business major with an entrepreneurial spirit wanted to fix a common first-world problem: the awkwardness and tediousness of exchanging multiple contact and social media information one at a time. “Oftentimes, asking and exchanging your phone number, Instagram, and Snapchat all at once can really disrupt the flow of a conversation”, Jagtap said. Sundrani and Steinberg were immediately intrigued and, together, the trio gathered to create mock ups of the app in Sundrani’s basement.

Soshi, the app, develops an individualized QR code to quickly and efficiently exchange information. Without storing any passwords, it gathers all of a user’s selected social media under their personalized Soshi profile. With toggle switches, users are able to switch which social media they want to share depending on the person.

When non-users scan a Soshi user’s QR code, they are taken to an online webpage with the user’s desired socials neatly hyperlinked. Existing app users will be redirected to the friends section of the app where they can track their connections for later reference.

The creators emphasize the importance of simplicity so that anyone can use it. The trio noticed how competitors in the space either had too many overwhelming features or did not cater towards the everyday person. Steinberg stated how “this app is something that people, especially college students, can use with people they meet in class, at parties, the gym, a pickup basketball game, and more”.

The summer of 2020, provided the trio with more time to work on the app. On slow or rainy days at the Germantown pool, the other lifeguards would make fun of the trio for spending time on the app instead of having  “fun.”

Along the way, Sundrani and Steinberg  taught themselves a new programming language called “Flutter” that is compatible with both Android and iOS. When asked whether it was challenging to learn Flutter, Sundrani said “it was definitely a learning curve but Jason and I began to enjoy creating the app once we got past it”.  This process has been a continuous cycle of trial, error, learning, and fixing errors, but one that has ultimately proved to be rewarding.

Steinberg shared that the most shocking part about the process was how long it took; the team started in the winter of 2021 and December 9th is the first scheduled beta release.Going forward, the three say that they envision themselves turning this side project into a full time job if the opportunity presents itself.

Metro to Reopen Shady Grove and Rockville Stations on January 16

New Parking Rates Will Go into Effect in Montgomery County on Monday, January 3

Beyond MoCo: A Joint Statement from Governor Wes...