On December 24, at approximately 4:15 pm, Takoma Park Police responded to the 7600 block of New
Hampshire Avenue (Gold Design) for the report of an armed robbery.

Three unknown masked suspects wearing gloves entered the jewelry store shortly after 4:00 pm. One of the suspects brandished a long gun and shot at the jewelry case. Another suspect jumped over the
counter and started to smash the display cases and steal jewelry with a third suspect. An unknown amount of jewelry was stolen.

One of the suspects was wearing a light blue Champion winter coat and the other two were wearing all black. All three suspects were wearing face masks. Items of evidentiary value were seized by police. Possible suspect vehicle is a black BMW with paper tags that fled southbound on New Hampshire Avenue.

No one was physically injured during the armed robbery. Lookout information was provided to all surrounding jurisdictions.

Investigators are asking that anyone with information about this incident, or knows the identities of the
suspects, please contact the Takoma Park Police Department at 301-270-1100 and refer to case
#210052513. 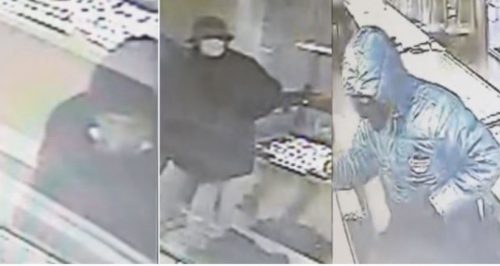 UPDATE: Peter Namasata has been located safe and unharmed.

Why No Beer and Wine for Most Grocery Stores in MoCo?

Man Convicted in Retrial of Killing His Girlfriend’s...