9/8/21, 10:30AM Update: Adam Schefter has tweeted clarification on Tanya Snyder’s comments on his podcast, stating that a Washington Football Team spokesperson said the list of eight names were a selection of names that were highlighted in the WFT’s Making the Brand Video, and not a final list of potential name candidates. 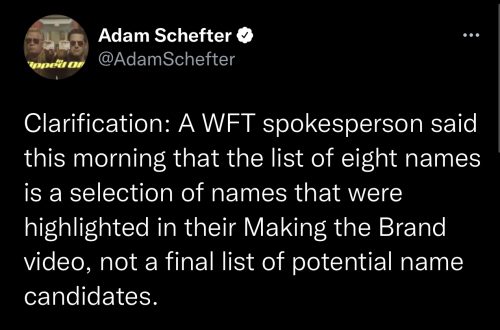 NBC Sports Washington’s JP Finlay tweeted that he has “said for a while” that Commanders will be the name that’s chosen and is sticking with that opinion as we get closer.

The team previously announced that they will remain the Washington Football Team for this upcoming season.

Additional Information Regarding This Morning’s Explosion in Laytonsville

Washington Commanders Announce the Return of the Marching...

Beyond MoCo Update: Suspect in DC Shootings Has...