The Montgomery County Council has approved funding to acquire the property on 1110 East-West Highway in Downtown Silver Spring.

Per the Council staff report:

This acquisition will create the new South Silver Spring Urban Recreational Park that will provide recreational amenities to a diverse, underserved, and growing urban community.

The proposed park is supported by the Equity Focus Area (EFA) analysis recently completed by the Parks and Planning Departments. It would serve a neighborhood located within the EFA that covers much of the Silver Spring CBD.

The Maryland-National Capital Park and Planning Commission has negotiated a Purchase and Sale Agreement to acquire this property from Imperial Investment Company for $7,500,000.

The parcel in question was specifically designated in the Energized Public Spaces Functional Master Plan (County Council Approved and Adopted, 2018) as a proposed urban recreational park.

The property fronts on East-West Highway and Kennett Street on opposite sides, providing the public access and visibility necessary for an urban park.

After the property is turned over to the Parks Department, removal of the existing structure and pavement will be prioritized. To create an interim park that is available for public use after demolition is complete, simple improvements such as open lawn, natural surface paths, benches and picnic tables may be added to the new park.

The costs associated with demolition and minor interim improvements are estimated at $500K, including abatement of hazardous materials. This initial work will be funded through a combination of available funding sources. 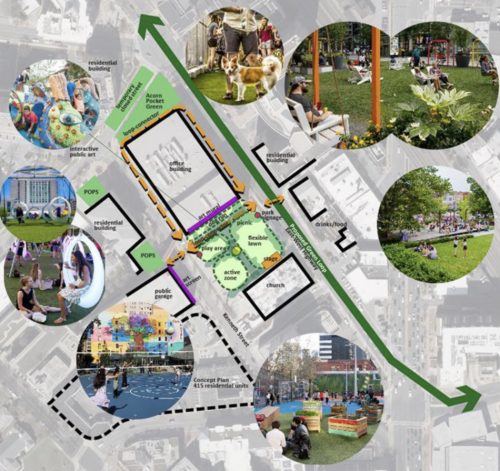 After demolition and site cleanup and conversion into the interim park condition, interim OBI is estimated at $5,000/year. Tasks to keep the new park maintained during this interim period primarily include regular park maintenance (mowing, trash removal, etc.) and park police monitoring of this urban park site.

Future development as a full Urban Recreational Park will be prioritized and implemented through the Parks CIP process. Facility planning will provide estimated capital and operating costs for a fully developed park, and creation of a stand-alone capital project will serve to provide funding for this significant urban park project.

The full council staff’s report can be seen here.