In yesterday’s update we mentioned the possibility of snow Wednesday into Thursday. “A few well-timed inches can throw a wrench into the Thursday morning commute.”

Today it looks like the possibility for a bit of snow on Thursday morning is there, but if it occurs it likely won’t be anything big.

The National Weather Service has released its first maps for the potential winter weather event. 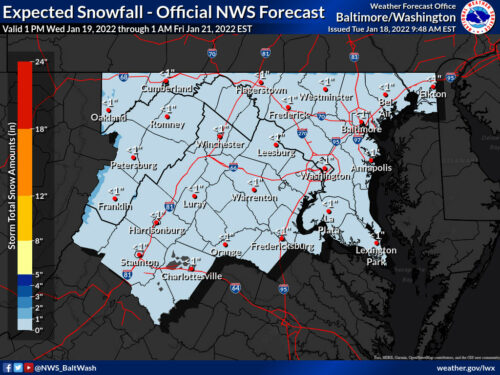 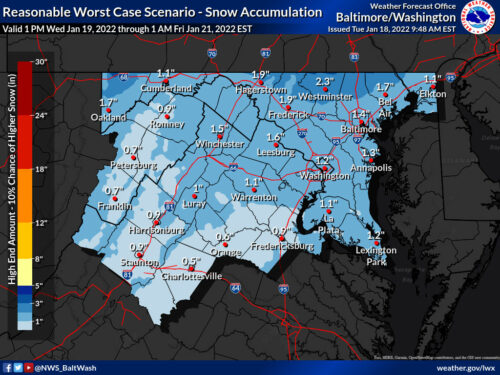 Right now it looks like the NWS isn’t expecting much out of this, with the map showing less than an inch for almost all areas. The “reasonable worst case scenario” map shows about 1-2” for MoCo.

This will likely start as rain late Wednesday night or very early Thursday morning and potentially transition to snow between 5am-7am or so. This is where things would get very tricky for the morning commute, as it’s possible that we see moderate snow for a couple hours.

We’ll continue to monitor and see if this becomes more of a threat or if it gets pushed a little further north.

Regarding the potential Saturday storm, the two major long-range models are still disagreeing. The Euro has the low close enough to the coast to bring us some serious snow, while the GFS has it far enough off-shore to basically miss us. We’ll also have to keep watching this one to see which model caves.