Paul Rabil announced his retirement today from the sport of lacrosse. Rabil, widely considered the face of lacrosse, grew up in Montgomery Village and attended Watkins Mill High School for a year, crediting his only lacrosse season there for helping him fall in love with the game.

He headed over to Dematha and then Johns Hopkins for his NCAA career.

Along with his brother Mike, Rabil formed The PLL (Premier Lacrosse League), a professional lacrosse league, which had its inaugural season in 2019.

He most recently played with the Cannons Lacrosse Club in the PLF. He previously played for the Boston Cannons and the New York Lizards of Major League Lacrosse. 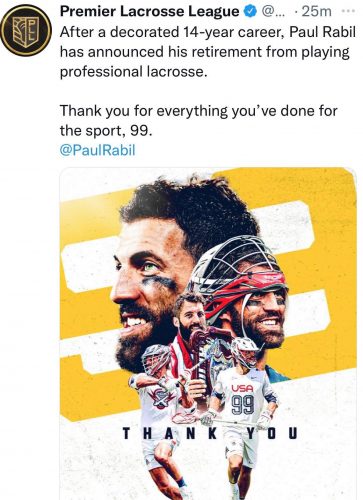 After a decorated 14-year career, Paul Rabil has announced his retirement from playing professional lacrosse.

Thank you for everything you’ve done for the sport, 99.@PaulRabil pic.twitter.com/5w56IvX418

MCPS: Community Message on the New Agreement Between...