Nori Japan to Open New Location Across From Lakeforest Mall

Nori Japan, one of the last remaining tenants at Lakeforest Mall, has announced its opening a new location across from the mall in the Montgomery Village Crossing shopping center.  Nori will be taking over the space that was previously occupied by Wok Express. According to signage at the restaurant, “This is the new address for the store (9615 Lost Knife Rd, Gaithersburg, MD 20877) near the H Mart Shopping Center. Now we are prepping for the opening of our new store. When we finish the prepping we will posting on the Facebook. Please add my Facebook ID Wei Huang. Thank you.” According to the owner, the restaurant is just waiting on permits before it can make the move.

In other Lakeforest news, Bath & Bodyworks and Charley’s Cheesesteaks have both closed, and Macy’s is currently running a store closing clearance sale. The mall itself is expected to close at the end of March, according to a recent announcement by WRS Inc.– the mall’s new owner. 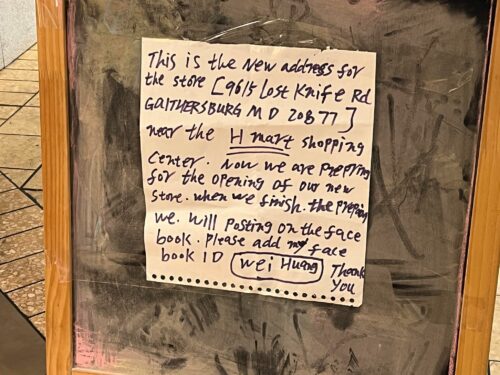 Update: Dunkin’ to Take Half of the The...

“Downtown Brew’s” to Open This Week

A cheesestake it is not stake . These new opens are not what thy use to be !