Winter Weather Advisory in Effect From 6am Until 3pm Saturday

A change from rain to snow is now expected sooner than previously anticipated. 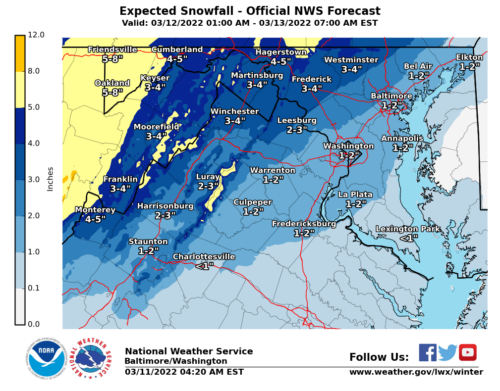 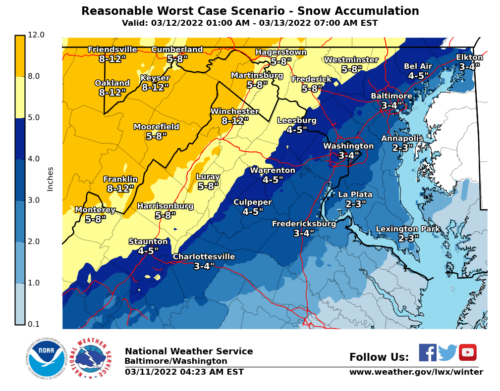 The advisory, per the National Weather Service:
WINTER WEATHER ADVISORY IN EFFECT FROM 6 AM TO 3 PM EST

* WHAT…Snow expected. Total snow accumulations of 2 to 4 inches. Northwest winds will gust around 45 to 55 mph.

* WHERE…Portions of central and northern Maryland as well as portions of northern Virginia.

* WHEN…From 6 AM to 3 PM EST Saturday. Rain will change to snow between 5 and 7 AM early Saturday morning. The steadiest snow will be through midday.

* ADDITIONAL DETAILS…Visibility may be reduced to below one- half mile at times.

Slow down and use caution while traveling.

When venturing outside, watch your first few steps taken on
steps, sidewalks, and driveways, which could be icy and slippery, increasing your risk of a fall and injury.

Projected Snow Totals for Saturday Increase Again; Half the County Now in 3-4″ Range