Back in July we let you know that Caruso’s Grocery will be taking over the dining room portion of Owen’s Ordinary in Pike & Rose. We also let you know that the bar and patio at Owen’s Ordinary will be rebranding as Owen’s Tavern and Garden.  Chef Matt Adler announced via Instagram (seen below) that Owen’s Tavern will be holding its soft opening this weekend (first weekend of November). Adler does include a disclaimer letting everyone know that they may not be fully ready. The menu can be seen below: 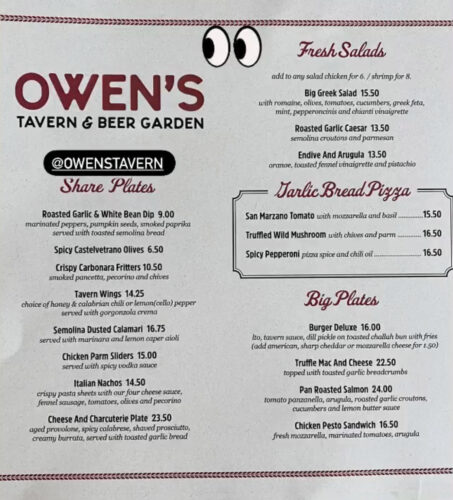 Both Caruso’s and Owen’s are operated by Neighborhood Restaurant Group.  Chef Matt Adler previously told Washingtonian Magazine that Owen’s dining room was never as busy as its  bar and patio so it made sense to repurpose the underutilized space. Caruso’s is still in progress, so there will be a little bit more of a wait until that aspect of the rebrand is ready to open.

Caruso’s Grocery opened its first location at The Roost food hall in Capital Hill DC back in May 2021.  According to their website, “Caruso’s Grocery is modeled after the classic, Italian-American ‘red sauce joint. You know the one: red banquettes, a killer chicken Parm, Sinatra pouring through the speakers. If you’re looking for modern interpretations of a chef’s take on the classics, you won’t find them here. Caruso’s Grocery will be home to traditional Italian-American fare focused on execution and high quality ingredients – menu items include Chicken Parmesan, Penne alla Vodka, Mozzarella en Carozza, Sole Francaise, Garlic Bread with Four Cheese Sauce, and more old school hits. A joint venture from Neighborhood Restaurant Group and Partner Matthew Adler.” 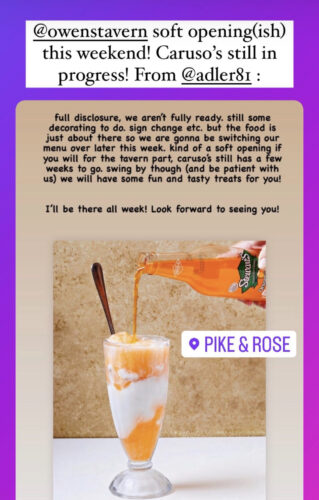 Featured photo by @DebLindsey via @adler81