A Winter Storm Watch has been issued as close as Frederick County. The reason MoCo is not yet under anything is because a Watch is issued when there is confidence for 5 inches or more. As of now, the National Weather Service has most of MoCo in the 4-5″ range, with a south/east MoCo in the 3-4” range, and Upper MoCo in the 5-8’”range. The Watch areas will likely turn into Winter Storm Warnings, and we can easily see a Watch put in place later today, especially for Upper MoCo if the confidence for more snow is there. Either way, I suspect at least an Advisory for all of MoCo. 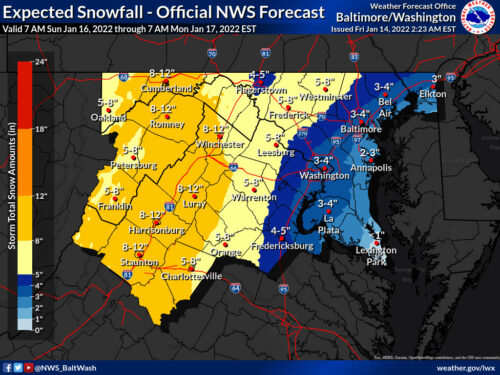 Fox 5 has weighed in with its First Call Map and approximately 2/3 of MoCo is in the 4-8” range with South/East MoCo in the 2-4” range. 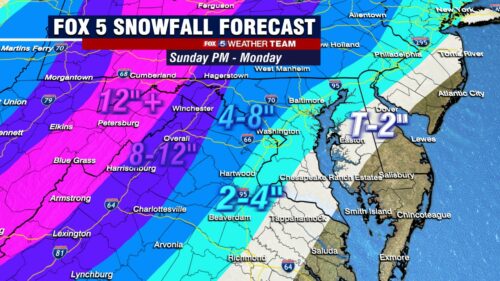 Things will look to get started on Sunday afternoon. The snow will get heavier into the evening and it still looks like we will see a switch to sleet and then to rain overnight Monday. Today’s runs will give us a better understanding of where it looks like that low will position itself.

As we mentioned in yesterday’s update, If the track of the low is over/near us, we will likely see enough warm air brought in to change things over. If the path takes it further east, we will see snow for a longer time (or the whole time, depending on how far east it moves), and if it comes too far west, we will see more rain than currently expected. All are still possibilities, with the first option being the most likely.

Right now, it looks like this storm will have an impact on Sunday evening, Sunday night, and early Monday morning before being washed away by the rain.

The National Weather Service also releases “Reasonable Worst Case Scenario” and “Low End Amount” maps, and those can be seen below. A lot of people respond to these with “So anywhere from 1 to 8.5 inches” and to be perfectly honest, that’s what it means…in a way. There is about a 10% chance of each of these scenarios happening, with an 80% chance of the main map happening at the time it is released. 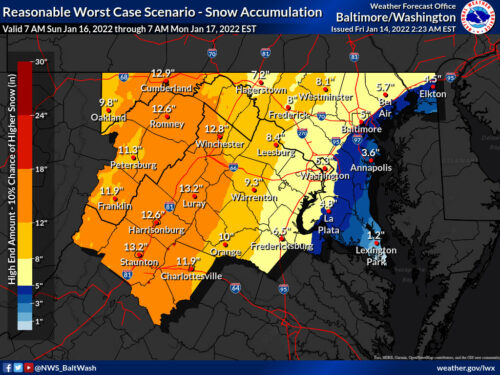 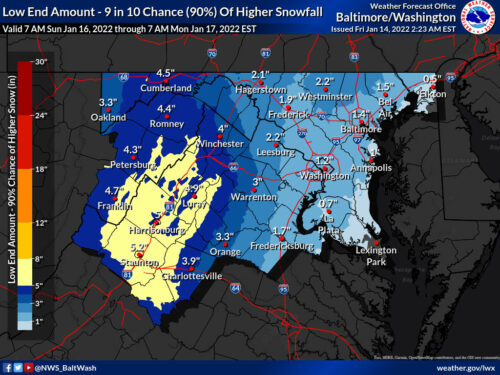 Things change and they likely will change a few times before things look a little more clear. We’ll have updates for you throughout the day.

Below you will see the “forecaster’s discussion” from the National Weather Service.

Rapidly moving and strengthening low pressure then becomes the main focus. The system will be moving at a fairly good clip, but the intense forcing as the warm advection is forced quickly over the departing cold air mass will mean business.

The track of the low will ultimately be key as far as how far west the mixing and rain gets, and there remains some model uncertainty between the various suites, but are confident enough that our western half will see warning level snow such that, after collaboration with neighbors and WPC, it was decided to issue winter storm watches.

This does not rule out winter storm warning criteria conditions further east, but confidence just isn`t there especially given the long lead. However, at this time the most likely scenario is a heavy burst of snow on the front end for most as the storm moves into the region Sunday afternoon, following by a mix to ice during the evening and plain rain possibly for areas near and east of I-95.

At this time icing is not expected to reach our far western zones, where the heaviest snow of a foot or more is possible. Where the snow and ice do change to rain, heavy rain will possibly result in minor flooding. Winds may also be quite gusty in those locations east of the low as it passes, and for all areas right after the low passes, with gusts possibly approaching 50 mph.

Will be watching forecast trends for potential wind advisories. It must be noted that even areas which don`t see warning level snow have the potential for a brief burst of very heavy snow before the changeover occurs, with rates possibly approaching those seen on January 3rd south of DC for a time. This could make travel very difficult during that time, most likely occurring late Sunday afternoon into Sunday evening. The low looks likely to move fast enough such that heavier precip is moving out by late Sunday night, but some wraparound rain/snow is possible. Additional accumulations on the back side look minor, however.

Metrobus is Now Running on a Saturday Supplemental Schedule on Weekdays