Khalid Mahmood was born and raised in Pakistan. He moved to America with his wife, Aneesa, in 1993 from London, England.

Aneesa Mahmood was born in Pakistan and raised in London. The recipes that are prepared at Silver Spoon Kabobs are all her creations. Her signature recipes are Spinach Potato Curry, Beef Nehari and Chicken Biryani.

Khalid’s first job in America was at a McDonald’s. He and his wife were eventually able to save up enough money to open a dollar store in Rockville. They moved on to an ice cream shop at Rehobeth Beach before returning to open a pizza spot in Rockville. In 2004 the family opened Silver Spoon Kabobs in Gaithersburg.

Aysha Mahmood is Khalid and Aneesa’s daughter. She started serving customers at the restaurant when she was just 16 years old. After graduating from West Virginia University, she returned to take over to the family business in 2015. Since then, she has implemented a new table service and introduced vegan and gluten-free menus for the restaurant.

Silver Spoon Kabobs is a halal restaurant that offers Pakistani, Indian, and Middle Eastern dishes. The menu and more information can be viewed here.

Pictured is the Combo #5: lamb kabob and ground beef kabob. 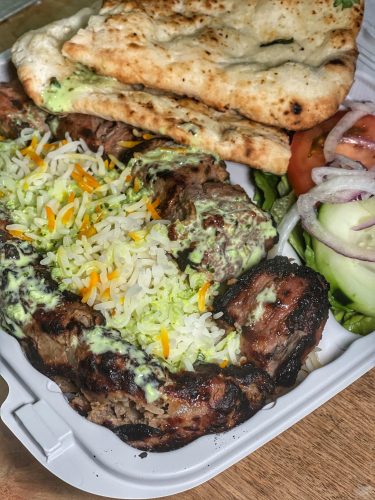 Welcome jaleo.joseandres keep the tapas menu and add more spanish diner cuisine.we welcome the new opening bravo and the decor and music and the Jaleo buzz and service

more of the Spanish diner